Ten Years of the Fund for Lake Michigan

Erin Keleske- A decade is like the blink of an eye in the million-year lifespan of a Great Lake, but as the Fund for Lake Michigan marks its 10-year anniversary, it’s clear just how much can change in such a short span of time. 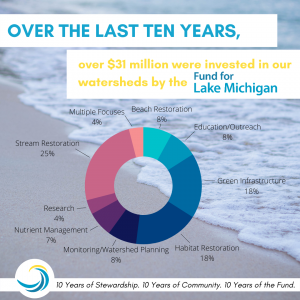 The Fund was launched in 2011 as part of an agreement between environmental groups and Wisconsin electric utilities as a means to “address, reduce, and mitigate water quality impacts in Lake Michigan.” Since then, the Fund has delivered over $30 million across 450 grants to local groups, nonprofit partners, and government agencies — a large but worthy investment for the places and people we care about here in Wisconsin, says FFLM director Vicki Elkin.

The Fund now has collaborators in almost 170 organizations all the way from Kenosha toDoor County, and the good work isn’t just happening along the shorelines. The Fund has projects in over fifteen watersheds, focusing on coastal ecosystems but also the headwaters that feed into them. 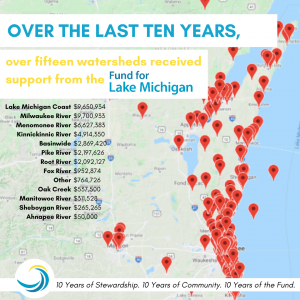 In our urban environments, the Fund has supported a green infrastructure revolution with innovative stormwater management projects popping up on schools and college campuses, community centers and gardens, local businesses, and public parks. Informed by the cutting-edge research of Wisconsin’s top scientists and engineers, local leaders and community champions have come together to craft the future of our watersheds. 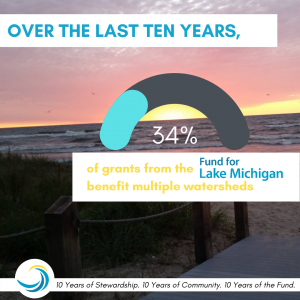 Perhaps most importantly, the Fund has invested nearly $4 million over the past decade on education and research to prepare the next generation of water stewards to lead not just locally but globally.

As we look back on the progress we’ve collectively made, it’s hard to believe the watersheds we see today are the same shores we stood on ten years ago, and we’re thrilled to see how our communities have grown and changed alongside them. Over the next few months, join us virtually as we highlight some success stories and phenomenal partners in celebration of Ten Years of the Fund.