Finding a Home for a Living Fossil

Erin Keleske – At the bottom of Lake Michigan dwells an ancient creature with origins dating back over a hundred million years. With distinct, shark-like tails and armored plates, the mere sight of these living fossils leaping from the lake is enough to captivate any audience.

As the largest and longest-living species in Lake Michigan, the lake sturgeon (Acipenser fulvescens) should be difficult to miss, but these gentle giants have been absent from most of their native habitat for over a hundred years. Severe overfishing and pollution have nearly eradicated a species that has been around since the days of the dinosaurs, leaving sturgeon classified as a threatened species in 19 states.

But thanks to diligent conservation efforts like the Ozaukee County Planning and Parks Department Fish Passage Program and the Riveredge Nature Center’s Sturgeon Reintroduction Project, the species is making a comeback.  As part of a joint effort between Riveredge and the Wisconsin DNR, over 17,000 lake sturgeon have been released since 2006, and the community has been celebrating every step of the way. Every year, scientists and community members alike flock to Lakeshore State Park to hand release young sturgeon at Sturgeon Fest and learn about the vital role they’ve played in Wisconsin’s history.

While these reintroduction programs are promising, more difficulties lie ahead for our freshwater friends. Sturgeon imprint on the river they were born in and return there in early spring to spawn along the rushing river banks at around the age of 25 — meaning the newly-released individuals have yet to breed for the first time. Until they do, it’s a race to ensure these 200+ pound behemoths have suitable habitat in the Milwaukee River. 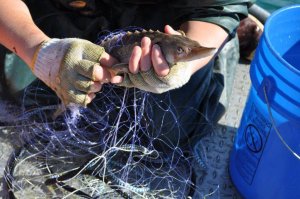 Thankfully the biologists from Ozaukee County are not leaving anything up to chance. Support from the Fund for Lake Michigan and the Wisconsin Department of Natural Resources has allowed these scientists to use a novel tool to evaluate over 15 miles of the Milwaukee River. Side-scan sonar uses pulses of sound to create an image of the river floor and evaluate its suitability as potential spawning habitat.

“I have completed projects involving habitat assessments in the past but those were always done by wading through the river. I knew the traditional way would not be possible for such a large project area,” says Ozaukee County fisheries Program Assistant, Ryan Miller, who first began his work with sturgeon as a volunteer at Riveredge on the Return the Sturgeon Project.

This massive dataset is already informing management strategies, including where to release sturgeon and where to invest in constructing better habitats. Miller says early analyses of the data are already showing exciting results and validating past restoration efforts like the 2010 removal of Lime Kiln Dam in Grafton, which now appears to be the highest quality spawning habitat in the County.

While these fish may look like creatures of legend, their role in our aquatic ecosystems is anything but fantasy. Pairing cutting-edge technology with dedicated biologists like those at Ozaukee County is proving to be an innovative way to solidify this ancient animal’s place in Lake Michigan for years and years to come.