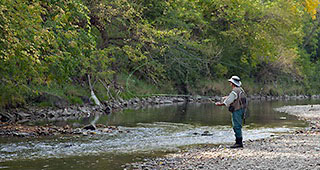 Sturgeon, steelhead and salmon are making a comeback in Southeast Wisconsin because of projects we have supported. Just eight miles upstream from Lake Michigan in Kenosha County’s Petrifying Springs Park, the Pike River was blocked by an obsolete dam that was built in the 1930s to irrigate the nearby golf course. The dam prevented upstream fish migration and worsened the flooding that often forced the County to close the park after heavy rains. The Fund for Lake Michigan supported Kenosha County in removing the dam and restoring the streambank. As a result, 22 more miles of the Pike River are open to fish migration and the park keeps the gates open all year.